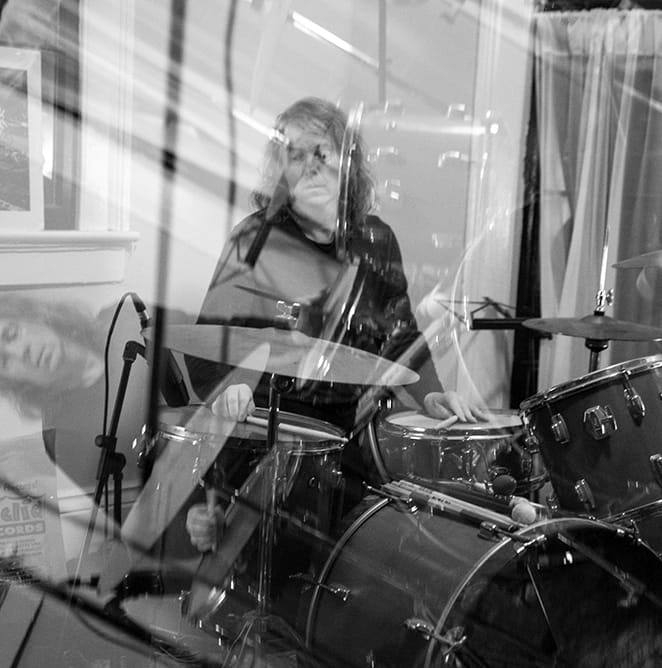 Chris returned to in-person concerts in May, 2021, both outdoors and inside. He continues to perform occasionally via livestream on Facebook and Instagram.


Feb 12, 2022 -- Chris Brokaw Solo
Cambridge, MA, at The Lilypad, w/Sleepyhead and The Royal Arctic Institute. Chris will play a solo electric set and go on at 7:30. Details here


Chris Brokaw "Winter of Our Discontent" Tour
February, 2022
Chris is excited to travel to Berlin, Rotterdam, Brussels, and France. This follows an October 2021 tour of Italy for his first European dates since the pandemic began. 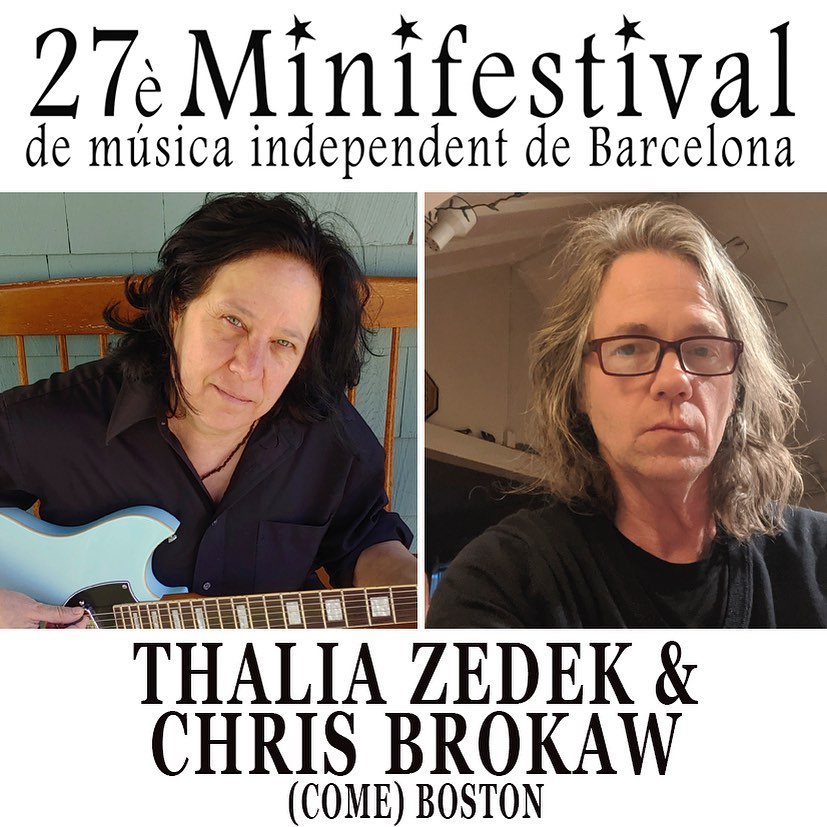 Follow Chris on Facebook and Instagram for up-to-date news. This website is often a few weeks behind. Contributions for online shows can be made via PayPal (chrisbrokaw@yahoo.com) and Venmo (@Christopher-Brokaw-2). Chris is teaching guitar and drums by video and in person. Email him at redcities2002@yahoo.com for details. 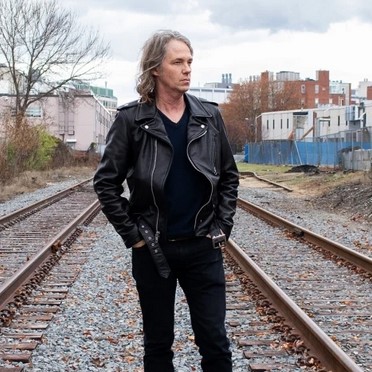 "Best of 2021" lists celebrated Chris' 2021 LP "PURITAN" and the reissue of Come's "DON'T ASK DON'T TELL." The French magazine EXITMUSIK named PURITAN the #1 album of 2021. Details about PURITAN and a selection of reviews are here. Fire Records of London, England, has begun reissuing Come's entire catalog, a project that will run from 2021 to 2023. 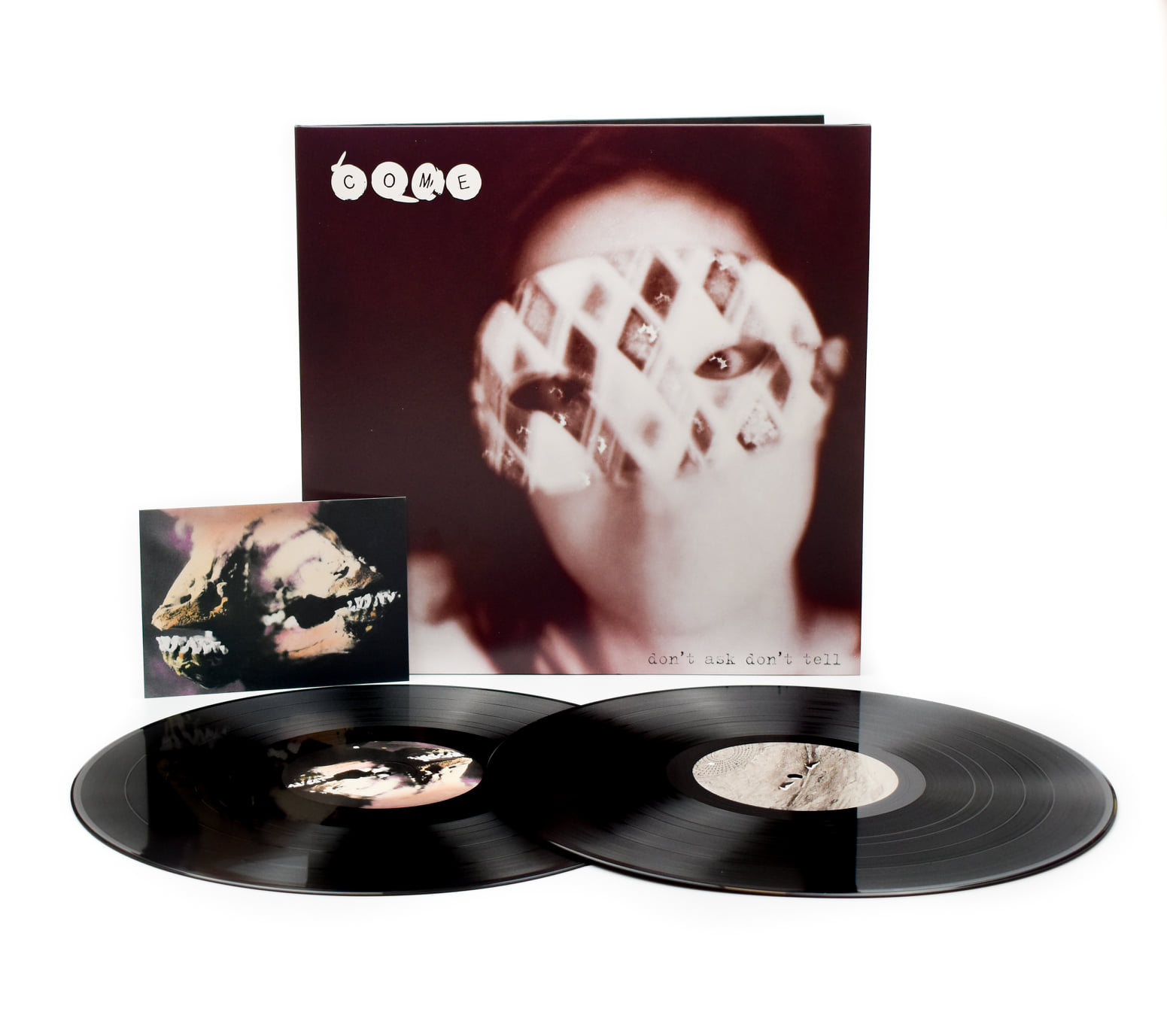 The first release, DON'T ASK DON'T TELL (from 1994), came out October 22, 2021. The reissue is a double album/double cd with singles, b-sides and a few previously unreleased gems. Read more from Fire Records. MOJO gave the reissue four stars. Newly remastered versions of "Car" and "German Song (Demo)" are included. (Find both at this Pitchfork article.) Come played two shows to celebrate, in November 2021 at Union Pool in Brooklyn, NY. Watch a performance of 'Finish Line'. Next up is a package of previously unreleased Peel Sessions, recorded live at the BBC, and the song "Clockface," recorded live at Citi in 1991. Limited edition white vinyl is available. Details here; release date Feb 25, 2022. Dan Burton and Chris Carothers, who since 1994 have been making music under the name Ativin, asked Chris to play drums on their new record. They worked together in New Orleans in August and December 2021 and recorded in Chicago in December 2021, with Steve Albini producing. Dark Money is the name of Chris' newest band. It features Mark Morgan on guitar, Greg Kelley on trumpet, and Chris on drums and bass. The band recorded and mixed its first batch of music at Oddfellows in Weymouth, MA, in October 2021. 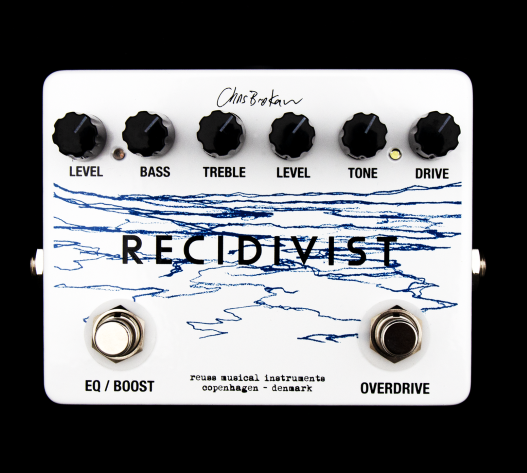 Reuss Musical Instruments of Copenhagen has collaborated with Chris on a guitar pedal, the Reuss Recidivist Chris Brokaw signature pedal. Chris has been collaborating with Findlay//Sandsmark, a Norway-based performance company working in dance, theater, video art, and live music, on the development of a new multimedia piece. It's titled "Florida (lowlands)." The piece debuted March, 2019, at Rimi/Imir SceneKunst in Stavanger, Norway, and at the Oslo Internasjonale Teaterfestival 2019. Details here. 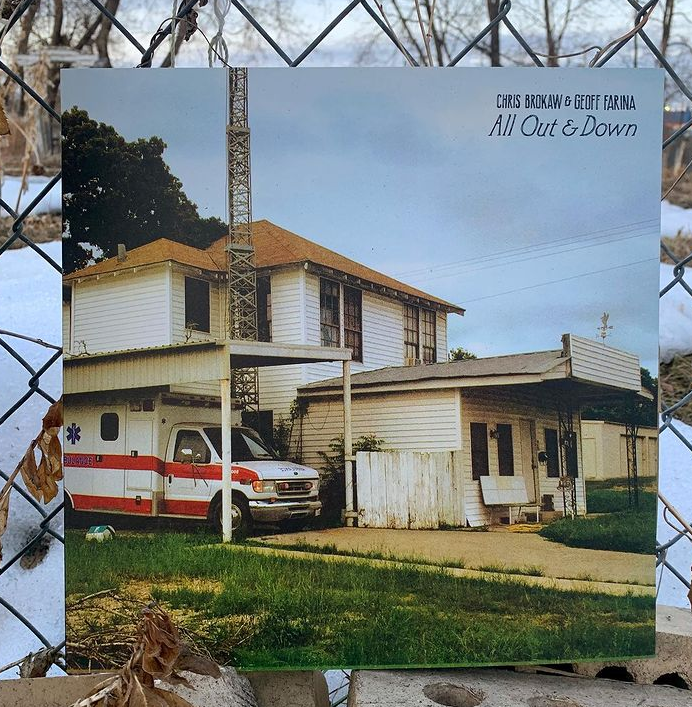 "ALL OUT & DOWN," Chris' 2016 collaboration of guitars and vocals with Geoff Farina, was reissued in 2021 in a deluxe silkscreened edition with a new gatefold jacket. The artisans behind this 3rd version of the album are Dan Black and Landland Colportage. The album includes covers of the Carter Family, Gun Club and more. Numbered edition of 145 copies. $25 postagepaid US (check with Chris for pricing outside US). In his most recent film work, Chris composed the score for the feature "Buck Run," which premiered at the Palm Springs International Film Festival in 2019. It's directed by Nick Frangione and stars James Le Gros. Watch the trailer. Variety says: "The drifting electric guitar of Chris Brokaw’s score further amplifies a timelessly melancholy air." Chris' movie work also includes "Barracuda," a 2017 feature film by Julia Halperin and Jason Cortlund. It was nominated for the SXSW Gamechanger Award and the SXSW Grand Jury Award. 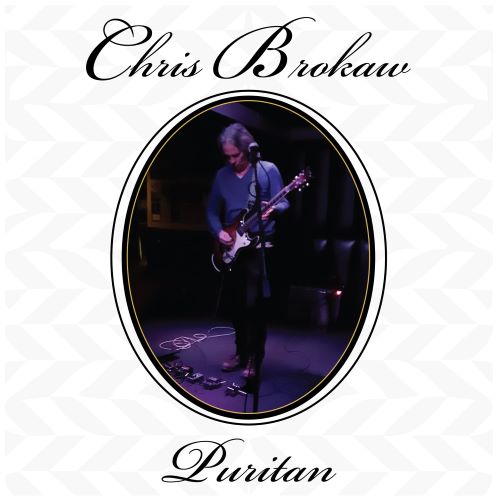 CHRIS BROKAW "PURITAN" lp and digital download -- 12XU, January 15, 2021 -- Many years in the making, "Puritan" is Chris' first all-out rock album since 2012's "Gambler's Ecstasy." It features bassist Dave Carlson and drummer Pete Koeplin. It is for sale on Chris' Bandcamp page in 140gram vinyl. The digital album can be purchased at 12XU. Read more about Puritan. 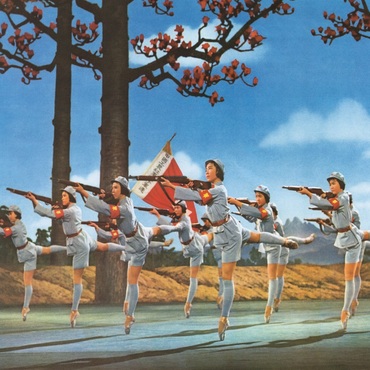 THE MARTHA'S VINEYARD FERRIES "SUNS OUT GUNS OUT" lp and digital download -- EJRC, February 26, 2021 -- Third release by guitarist/vocalist Elisha Wiesner (Kahoots), bassist/vocalist Bob Weston (Shellac, Mission Of Burma) and drummer/vocalist Chris Brokaw. The Ferries' Bandcamp page includes history, videos, audio tracks, and links to buy the record digitally or on vinyl. Shows scheduled for October 2021 have been postponed due to the ongoing pandemic. 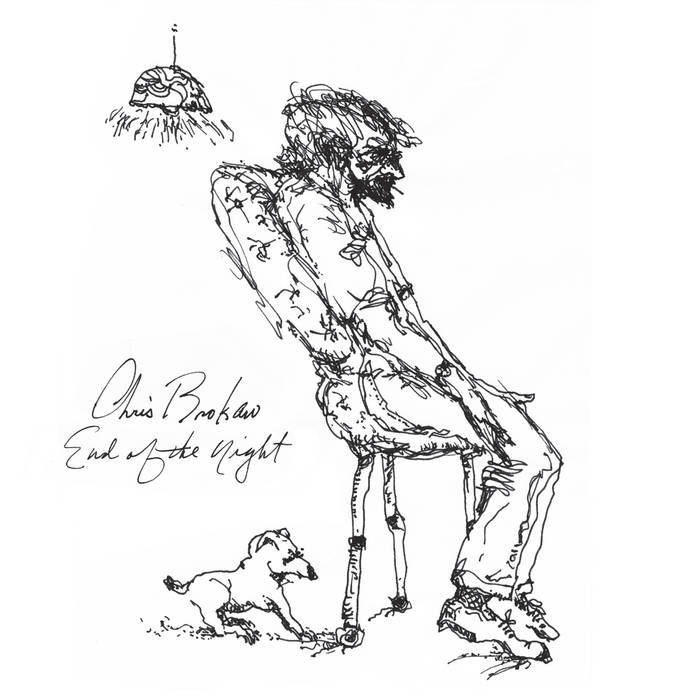 CHRIS BROKAW "END OF THE NIGHT" lp and cd -- VDSQ and tak:til/Glitterbeat, May 24, 2019 -- Chris and Steve Lowenthal came up with the idea: create the perfect last record of the night to listen to at home. Chris explains the evolution. Guests include Greg Kelley, Samara Lubelski, Lori Goldston, David Michael Curry, Luther Gray, Jonah Sacks, and Timo Shanko. Cover art is by famed artist Sandy Dvore. Press for the record includes 4 stars from MOJO ("pensive mood-mastery") and 8 out of 10 from Uncut ("flinty, deep-breathing guitar"). For sale at VDSQ (U.S., LP) and tak:til/Glitterbeat (Europe, CD, and digital). Read more about End of the Night. 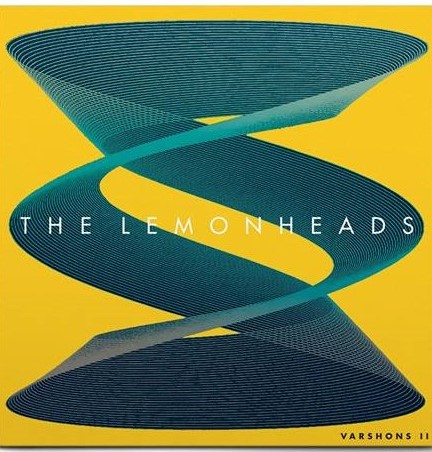 LEMONHEADS "VARSHONS 2" cd and lp -- Fire Records, February, 2019 -- As with "Varshons 1," this album is a set of covers of 13 artists, including Nick Cave & The Bad Seeds, Lucinda Williams, and The Bevis Frond. Chris played guitar on the album, including "Can't Forget" by Yo La Tengo. Track list here. The band toured Europe and the U.S. in 2019 with Chris on guitar and vocals. 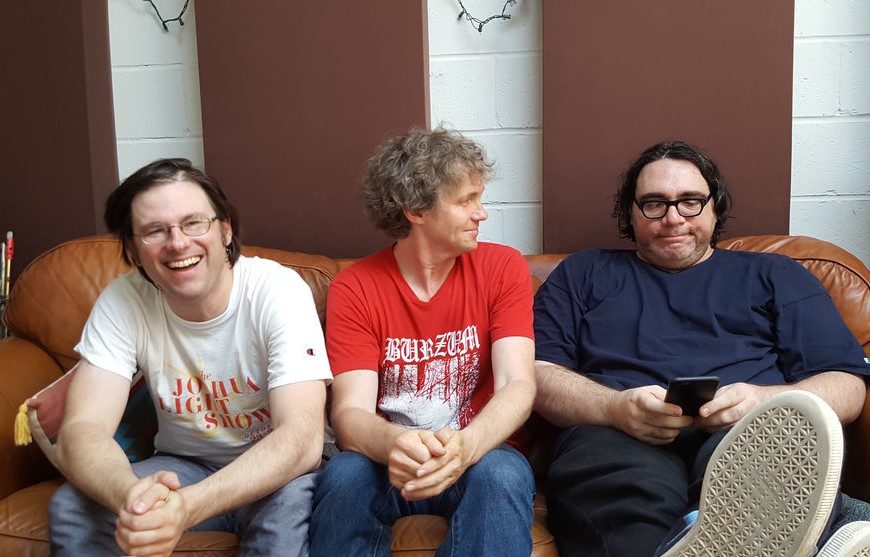 "CHARNEL GROUND" lp -- 12XU, April 6, 2018 -- Charnel Ground's debut release was recorded in Brooklyn, NY, and features Kid Millions (Oneida/Boredoms) on drums, Chris on electric guitar, and James McNew (Yo La Tengo) on bass and organ. Listen on Bandcamp to music that goes from “total rager” with “white-hot feedback” to “sunshine-infused pop numbers,” according to Doom and Gloom from the Tomb. For sale here with download code included. Read more about Charnel Ground. 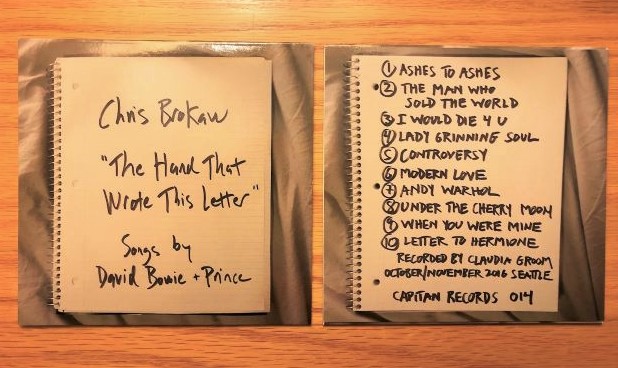 CHRIS BROKAW "THE HAND THAT WROTE THIS LETTER" cd -- Capitan Records, November 28, 2017 -- When a friend asked Chris to play her wedding, he asked for requests — and she said David Bowie and Prince. Chris turned some of their songs into classical guitar instrumentals and decided to make an album. Tracks include THE MAN WHO SOLD THE WORLD, I WOULD DIE 4 U, and CONTROVERSY. For sale here! This CD is on Chris' label and was recorded by Claudia Groom and mastered by Matthew Barnhart. Read more about The Hand That Wrote This Letter.